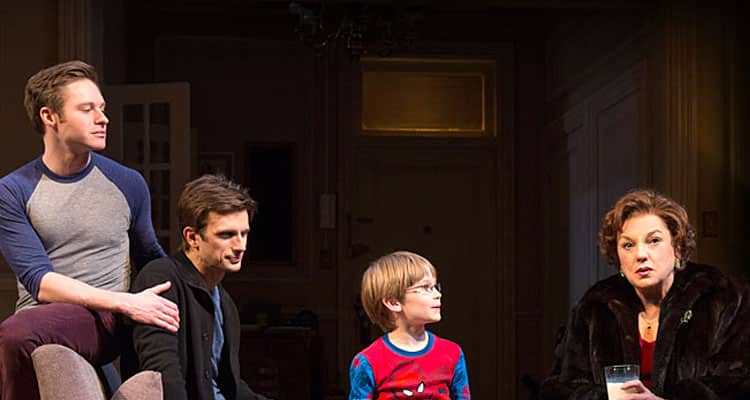 The Wonderful Tyne Daly In Broadway’s “Mothers and Sons”:

The Tony Award and multi-Emmy Award winning actress, Tyne Daly, gives a superb performance as Katharine Gerard in Terence McNally’s new Broadway play about love, loss, and redemption. Katharine a recent widow from Dallas, Texas looks up her deceased, gay son Andre’s ex-partner who lives in NYC to give him back a diary that had been her son’s. She finds that after more than a decade the partner, Cal, has married another man and has a 6 yr. old son, Bud. Katharine, already livid about her son’s lifestyle and the cause of his death-AIDS, becomes even more enraged at the apparent happiness of Cal, his husband, Will, and their son. Not only that, but Cal has become very successful as a wealth manager. Cal’s family lives in a beautiful apartment on very expensive Central Park West. This is where this new work by the talented Terence McNally begins.

If the subject matter seems too controversial or too dour in tone, do not be misled. Mr. McNally is a magician. He gets us to consider difficult subject matter, but he greatly entertains us at the same time. Yes, the work is very poignant, but it is also funny and even downright hilarious at certain points. It is amazing how McNally and this capable team of actors pull this paradoxical effect off effortlessly.

Ms. Daly, of television’s “Cagney and Lacy” and “Judging Amy” fame is also a highly regarded stage actress, and she is doing the best work of her life right now. To paraphrase the title of this magazine, she is, indeed, a Woman in Her Prime offering her audience a a truly stellar performance. She is supported by Frederick Weller who plays Cal her son’s previous partner, by Bobby Steggert as Will the new husband and by the adorable Grayson Taylor who plays Will and Cal’s son Bud. The chemistry of the cast is wonderful to watch.

Some of the ways that I judge art is if it makes me think of life and people in new ways. Does it engage my mind and my heart? Does it give me a new perspective on other people’s problems? Does it enlarge my heart and my mind in some way? “Mothers and Sons” does all these things. If you are going to be in NYC during the next few months, please plan to see this incredible work. It is time and money well spent.