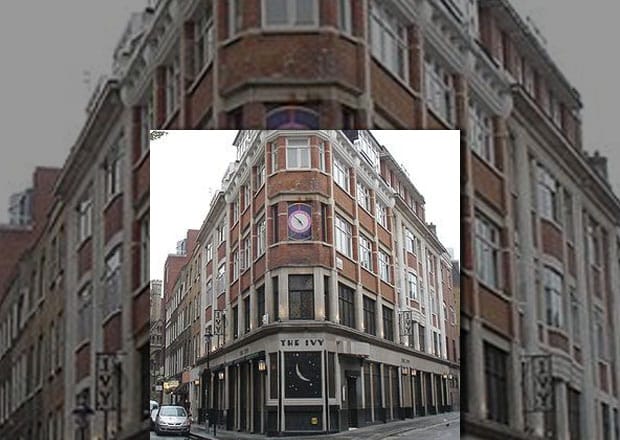 The Ivy was arguably London’s most famous restaurant of the nineties and noughties. Bought by iconic restaurateurs Jeremy King and Christopher Corbin in 1990, it became a playground for the rich and famous. Getting a table was almost an art form unless, of course, you were rich and famous and had their ‘special’ number. Sadly, I wasn’t and didn’t but I still had the good fortune to go on numerous occasions in my early twenties. In 2005, it was taken over by Richard Caring and I haven’t been since – not for any particular reason but simply because London’s restaurant scene has grown from strength to strength and there is now so much to choose from.

I have often wondered what it’s like these days and whether it still has the sparkle and magic that made it the dining destination of choice.  So, on Saturday afternoon, the Beard and I decided to try our luck at getting a reservation. Weirdly, I rather like it when I am told a restaurant is full; it excites me to know I am on to a good thing and makes me want to try even harder to get in. We were initially told there were no tables, but the reservations manager hardly sounded convincing and with only a modicum of gentle persuasion we were booked in for 1:30pm. Perhaps that should have alerted me to the fact that things aren’t quite what they used to be.

The Ivy wasn’t how I remembered it. It seemed darker. Maybe because it was raining outside, or maybe because the people who had just walked in before us, looked like they had arrived by coach (most of whom were donning a rucksack. What on earth were they carrying? A packed lunch perhaps in case the food was rubbish? Initial impressions were certainly that The Ivy ”crowd” isn’t what it once was. We downed a very good Bloody Mary at the empty bar before being seated in the dining room which was as buzzy as I remembered from previous visits.

We were sat next to outrageously drunk Finnish couple, who were arguing fiercely. She was crying, he could barely string a sentence together and they were throwing their food everywhere. It was seriously entertaining and I think the staff handled them brilliantly.  When the bill came they attempted several times to remember their pin number but after the fifth attempt gave up and staggered to the bar to continue drinking. I am sure we have all been there.

So, to the food: I had spinach and avocado salad with a blue cheese dressing to start with which was well presented, nicely balanced and very tasty; the Beard had leek and potato soup which was OK but it’s a shame it didn’t taste as good as it looked. To follow, I had the shepherd’s pie. It was quite good apart from the lashings of sweet, sticky gravy which did absolutely nothing for it. The Beard had a burger that was less than average. For a restaurant of The Ivy’s standing this was very disappointing. I still think the Berners Tavern burger is hard to beat.

The bill wasn’t too bad: £50 a head but this was without wine because the manager kindly let us have our drinks on the house for putting up with the Scandinavians so I guess we had something to thank them for. Was our visit worth it? Yes, because I wanted to see if the place still has it after all these years. Has it? Sadly not. Going to The Ivy these days feels like turning right onto an aircraft. Anyone who can, eats upstairs at the private members’ club.