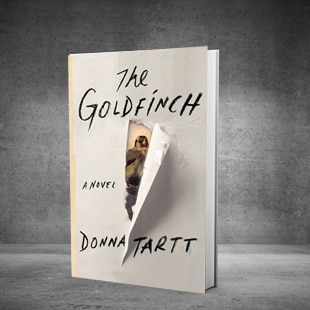 Donna Tartt’s third novel, The Goldfinch, has been long-awaited and is now celebrated as number one atop the New York Times best-seller list. It is the rare combination of incredibly well written literary fiction and gripping drama to the point of being a thriller. Many times the number one spot goes to the likes of John Gresham, Dan Brown, or James Patterson but Ms. Tartt deserves her accolades as the best-selling author in the U.S. She is after all a woman in her prime providing a fascinating read. Do yourself a favor and download her novel or buy her novel as you dash through the airport.

The Goldfinch by Donna Tartt:

The Goldfinch is the story of Theo Drucker, a 13 year old boy who visits the Metropolitan Museum of Art with his Mother while they kill an hour before they meet with the headmaster of Theo’s school. Theo is likely facing suspension for youthful hijinx and is dreading the meeting at the school, and he welcomes the diversion at the museum. They see his mother’s favorite two paintings, The Goldfinch by Carel Fabritius and The Anatomy Lesson of Dr. Nicolaes Tulp by Rembrandt. While they are in the galleries of the NYC museum that specialize in Dutch artists, a terrorist’s bomb goes off killing Theo’s mother and many others. Theo is stunned and mildly injured and when he awakens, he goes to the aid of an elderly man by the name of Welty Blackwell that he had been watching before the blast.

Theo decides to get involved with Mr. Blackwell because he was fascinated with Mr. Blackwell’s companion, a red-haired girl by the name of Pippa, Theo had observed the whole time that he had been in the museum. Theo believes that Mr. Blackwell and Pippa are grandfather and granddaughter. Theo listens to a cryptic message from the old man and accepts instructions and a ring from him for a friend of Mr. Blackwell’s. Mr. Blackwell seemed to be pointing to The Goldfinch painting when he expires and Theo feels a compulsion to take the painting which has come loose from its frame. This action will affect the rest of his life, and makes for a riveting tale.

The tiny masterpiece that Theo steals is by Carel Fabritius (1654) and becomes so symbolic of Theo’s struggles to gain the life that he feels he is meant to have. The painting presents a terrible burden of guilt as Theo struggles to return it, and make a life for himself filled with love and familial connections. A tortuous series of adventures defines Theo efforts to belong and to understand his place in the world no matter how skewed it is at times. Ms. Tartt uses art to buffer and explain the difficulties and miracles of life.

By book’s end, you will be eager to see the small masterpiece of the yellow-winged song bird, but don’t look for it at the Met. This placement was literary license on the author’s part. The Goldfinch (approx. 13 in. x 8 in.) hangs in Mauritshaus, Netherlands. A trip to see the tiny masterpiece is definitely worth the effort. As reading The Goldfinch, the novel, is definitely worth the effort.

Update 5/5/14: On April 21, 2014, when the Pulitzer Prize Committee announced the winners for 2013, the prize for Distinction in Literature went to Donna Tartt for The Goldfinch. This was the initial piece of fiction reviewed by PW and we were not surprised at the Pulitzer Committee’s choice in this category. It is a truly extraordinary work by a woman in her prime. At one point, the book was at the top of the NYTimes best sellers list for fiction. It is still on the list but rests at number 7 as this footnote is being written. Congratulations to Ms. Tartt. This is a well earned honor.

New Books to Read in October

Books to Read in September