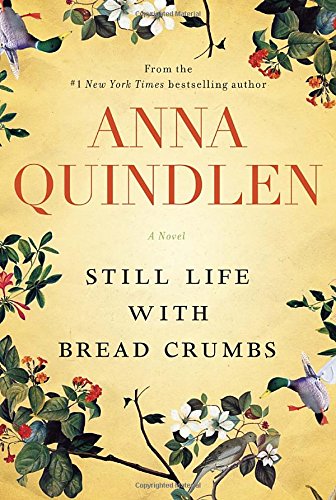 Ms. Quindlen is one of our Prime generation’s best regarded and most celebrated authors. At first, she was a Pulitzer Prize winning journalist before becoming a full time novelist in 1995. She has since written seven novels with the latest titled Still Life with Bread Crumbs. Three of her novels have been made into movies. One of the movies, One True Thing, starred Meryl Streep and earned her an Academy Award nomination.

Quindlen’s latest work of fiction is about a very well-known photographer, Rebecca Winter, who at age 60 and divorced is experiencing significant financial problems. At one time, Rebecca’s masterfully executed works of everyday household subjects commanded high prices and sold in high volumes. Now—not so much. “Still Life with Bread Crumbs” is the name of one of her early photographic masterpieces, and formed the bedrock of her reputation as an artist and made her an unwitting spokeswoman for the feminist movement. She had no idea how her works of kitchen scenes and others around her home would be interpreted by the masses. Rebecca was honestly shocked that her admirers and buyers found so many meta-messages in her photos.

Rebecca’s beautiful NYC apartment is costly to maintain, her parents aged care has drained her of savings and her daily allowance for what has become a greatly reduced lifestyle. Added to that, her son cannot seem to find his way to financial independence. Her ex-husband, an academic, has been married multiple women since Rebecca, and has fathered several more children than his and Rebecca’s son. He can offer no financial assistance whatsoever to either her or their son and never has been able to.

At the beginning of the novel, Rebecca has decided to rent out her apartment to reduce some of the strain on her bank account and has decided to lease for herself a “fully furnished cottage” in a rural area that is nothing like the charming description provided by the owner she discovers upon arrival at the property. It is on a “no name” road which somehow seems highly symbolic. There is precious little in the way of silverware and dishes or anything else useable in the kitchen. Furniture is minimal and the ultimate insult is that there is not electrical outlet in the bedroom. How ridiculous she things. Without a lamp, how do you read or work in bed? Though really discouraged, she somehow feels that she will be able to work again in this the most unlikely of places. She desperately needs money. She has no choice but to start over and make the most of what little she has in this new situation. Almost immediately as she begins to hike in the woods around her home, Rebecca find little arranged vignettes of personal objects that are mysterious and poignant. She can tell they are left by a woman. They fascinate Rebecca and she begins to take pictures of them. They almost seem like an omen. Another omen? A dog adopts her. She begins her new life, and it begins to become populated with new characters that she could never have predicted.

Ms. Quindlen, ever the magician with words and images makes Rebecca’s trials and frustrations familiar and beautifully drawn. As I read the novel, I found myself dreading to look down at the count on the remaining pages on my Kindle/I Pad. I didn’t want my all too brief acquaintance with Rebecca, her family and friends to end. I think she is someone that we can all identify with in her roles as wife, mother, daughter, or friend. We have all been in her position with our backs to the wall at one time or another in our lives. We have all faced some kind of desperation whether it was financial or emotional. Anna Quindlen makes us care about Rebecca Winter. Spend time with Anna and Rebecca. You will be glad that you did. A review that I read on Amazon about this book said that as soon the person finished the book, for the first time ever, she immediately went back to the beginning so as not to lose contact with the author and the protagonist. She felt that strong a bond with both. That is high praise I’d say.